The methodology for determining potential volumes of energy saving and energy replacement developed at ERI RAS has a specific feature – its integrated character and orientation towards resolution of practical tasks, including those in the long term. The methodology is based on system principles and envisions an organic combination of technological research and economic analysis, while taking into external limitations (macro-economic, technological, etc.) and the degree of uncertainty of initial information. Economically justified energy saving potential is determined in the sectors of the national economy. A technical and economic analysis of competing technologies and selection of priority technologies for implementation is made. Projected volumes of energy saving in the sectors of the national economy are also determined.
According to ERI RAS estimates, overall economically justified saving of electric power could reach over 91 bln. kWh in 2020 and over 180 bln. kWh in 2030 (Table 1). Potential heat energy saving (centralised heat supply) in basic types of economic activities is estimated at around 203 mln. Gcal in 2020 and 344 mln. Gcal in 2030. Moreover, there is considerable additional potential for centralised heat saving in households (115 mln. Gcal in 2020 and 163 mln. Gcal in 2030), as a result of a large scale reconstruction of the existing housing facilities (aimed at increasing heat transfer resistance of the walls of buildings, automatizing modes of heat supply and supplying consumers with devices to control and regulate heat consumption). There are large reserves of boiler and furnace fuel saving in Russia - over 100 mtoe in 2020 and nearly 145 mtoe in 2030 (not taking into account potential reduction in fuel consumption at power plants and in boiler houses as a result of electricity and heat power saving). Power plants and boiler houses account for approximately half of this energy saving. Potential primary energy saving potential in the country is 255 mtoe in 2020 and 445 mtoe in 2030 (not taking into account additional volumes of heat energy saving in households).
Economically justified volumes of energy saving presented above are not a constant value. They are determined by many technical and economic factors. The most important one is to create conditions for modernising production (including energy saving) and an accelerated transfer to an innovative economy in Russia, which would increase production and distribution of goods with a high added value and low energy intensity. Special efforts are needed from the government to realise the potential for energy saving that exists in the public sector and households.

Table 1. Estimates of economically justified potential for energy and heat saving in the sectors of the Russian economy, compared to 2008. 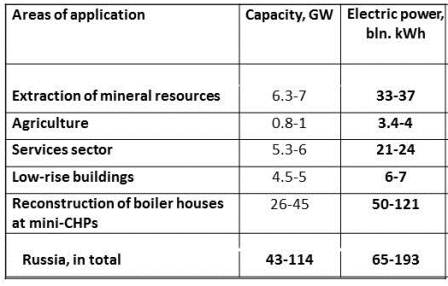 The issue of seeking optimum ways to increase energy efficiency in the national economy and substantiation of a rational structure of fuel and energy balances in the Russian regions has become more relevant in recent years. ERI RAS stepped up research on the issue of scientific and technological progress in the energy sector and evaluation of system effectiveness of specific innovative technologies and technological structures, including in the end-use energy sector. [1–9].
ERI RAS has performed predictive studies to evaluate potential capacity of regional energy markets for small scale generation technologies, including those using renewable energy sources. As a result of these studies, it was identified that the following areas for use of small scale generation in the Russian economy could be as follows: extraction of mineral resources, agriculture and the services sector, as well as systems of energy supply to low-rise buildings. However, most impact could be made by reconstructing large gas-fired boiler houses at mini-CHPs. (Table 2). According to the estimates, potential capacity of these markets for small scale electricity generation reaches from 43 to 114 GW of electric capacity and from 65 to 193 bln. kWh of electricity generation a year.
The studies show there are several factors conducive to further development of small scale generation in Russia. These are: continuing development of territories outside the centralised heat supply (over 2/3 of the total territory of Russia); considerable infrastructural limitations (the absence of technological possibilities for connection to electricity transmission grids) in many zones of centralised electricity supply; low density of high voltage electricity transmission networks; a high degree of wear and tear of low and medium voltage electricity transmission networks and relevant transformer facilities etc. Electricity supply is not sufficiently reliable and the quality of electric power is low in many areas of Russia, for these reasons.
As a result, effective use of modern devices and equipment has become impossible without the use of individual means of uninterrupted (reserve) electric power supply.

Table 2 Capacity of markets for implementation of small-scale electricity generation in the period up to 2020. 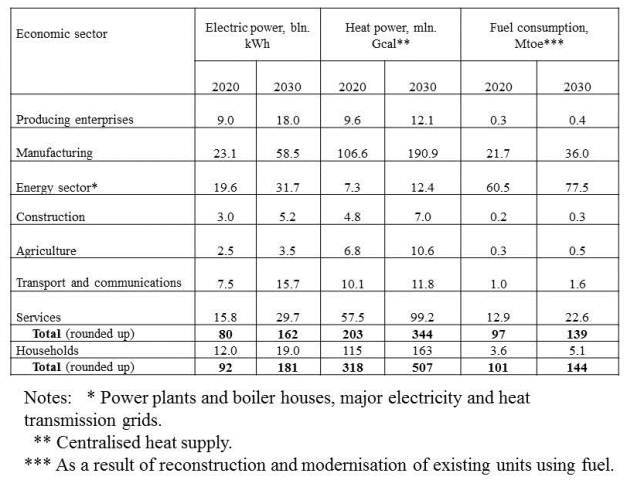 Significant changes can be expected in the market of power generating equipment. As a result of scientific and technological progress, we can expect technical and economic and performance standards of low power generating units, including those using renewable energy sources. There are vast local fuel resources in Russia; in particularly peat, as well as renewables. Predicted rapid growth of agriculture and the timber industry will be accompanied by a build-up of large volumes of agricultural and timber waste. The use of this waste in power generation should be combined with the resolution of other relevant issues: environmental protection, providing the agriculture industry with high quality fertilisers, etc.
At the same time as the share of distributed generation in the electric power system grows, new problems will arise. Firstly, there will be the issue of effectively managing this system’s operation. Secondly, there will be the issue of regulating financial relationships between the owners of small power generation facilities, electricity networks and large scale generation. To resolve these issues, it will be necessary to reconstruct existing electric power systems (turning them into “smart” electric grids) and develop relevant legislative support.
ERI RAS continues technical and economic research on the competitive ability of centralised heat supply systems compared to decentralised and individual heat power sources. The main directions of reducing costs in domestic centralised heat supply systems have been determined. These directions have to be implemented on a large scale, which is impossible without appropriate legislative and administrative support. Conditions for effective use of heat pump units in Russia have been determined.