Main » Relationships between the economy and the energy industry

Relationship between the economy and the energy sector

The fuel and energy sector is a key sector of the Russian economy. To a large extent it determines potential development of the country in the economic, social, technological and political spheres. Therefore research on the relationship between the energy sector and the economy is a traditional subject at ERI RAS. Studies are based on the methodology for system research, aiming for an integrated consideration of all aspects and directions of the relationship between the economy and the industries in the fuel and energy sector. Methods, economic and mathematical models and information databases are developed and regularly used in the qualitative analysis of the condition and development prospects of the fuel and energy sector. Currently the methodology for system research is a synthesis of the following methodical directions and tools:
• A modelling and information complex for predictive macroeconomic research;
• A method, an algorithm and software support for multi-linear programming. Prices of products/goods, tax rates, salary levels in the industries etc. can be used as the desired variables in optimisation tasks (ссылка);
• A software system for computerised interactive development, modification and application of static and dynamic economic and mathematical models;
• A methodology for making predictive computations aimed at searching for optimal compromise solutions;
• A methodology, an information database and analytical models for forecasting socio-economic development of all subjects of the Russian Federation
• A model for predictive research on the macroeconomic consequences of various measures to curb greenhouse gas emissions in Russia with a more detailed review of individual carbon intensive industries (ссылка).

Research on the relationship between the industries in the fuel and energy sector and the economy is aimed at:
• A reconciliation of parameters of the government investment policy, pricing, taxation and export policies in the energy sector with the dynamics of the development of the industries in the fuel and energy sector, capabilities of the government budget, industries - energy consumers and households.
• A macroeconomic substantiation and an evaluation of the macroeconomic impact of strategic decisions in the area of the development and reforms in the domestic energy markets, taking into account a balance of interests between producers and consumers and based on economic development goals and conditions in external energy markets.
• A reconciliation of rational scenarios of production, investment programmes of the energy industries and large companies and predicted dynamics of macroeconomic indicators / predicted development of the adjacent non-energy sectors of the economy.
• An analysis of possible stimulation mechanisms and an evaluation of the impact of various measures to curb greenhouse gas emissions on the Russian economy;
• Developing mutually coordinated scenarios of socio-economic and industrial development of all subjects of the Russian Federation, taking into account possible changes in the current trends in the industry structure of the economy of the subjects of the Russian Federation. 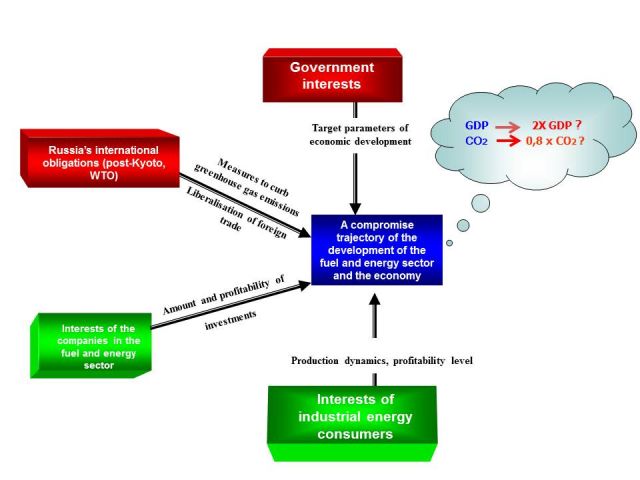 In 2005 ERI RAS developed a system of performance indicators measuring the effectiveness of the government energy policy. Methods to use these performance indicators during the implementation of the Energy Strategy of Russia for the period up to 2020 were also produced. Favourable variance in the actual values of these indicators as compared to the relevant values within the optimistic scenario of ES-20 was registered for the majority of these indicators. This was demonstrated based on the computations within the inter-industry optimisation non-linear model of “the energy sector within the economy” (ссылка).
A comparative analysis showed that a rapid increase in world hydrocarbon prices contributed to an accelerated reduction in energy intensity of the economy. However, as soon as in 2005 the negative impact of growing energy prices became evident. An increase in the efficiency of consumption in non-energy industries had less of an impact on a reduction in GDP energy intensity than the ES-20 had envisioned

It was noted that economic growth based on rising world prices of a fairly limited list of goods cannot be stable and long term. Should the discovered trends remain and world energy prices decline, economic development and GDP energy intensity dynamics could fall below the levels specified within the ES-20. 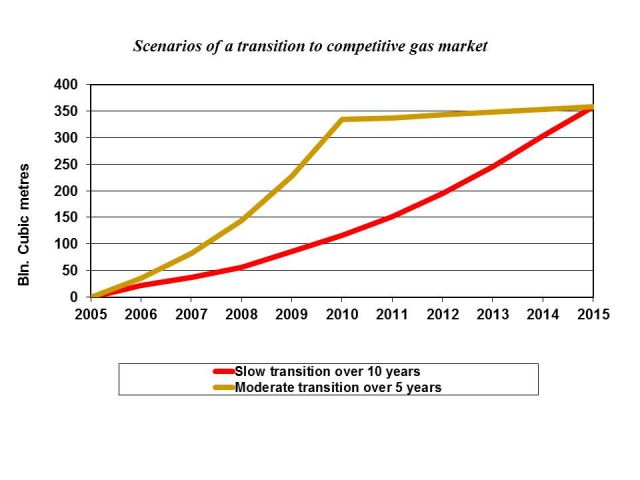 Research demonstrated a weak dependency between financial stability and investment attractiveness of gas companies and the speed of reforms in the domestic gas market. Despite this, it was recommended that formation of a competitive segment of the gas market is not delayed, due to a high degree of uncertainty in the level of world energy prices.
In particular, the option of a 5-year transfer of commercial consumers from a regulated to a competitive market was chosen as a compromise scenario. A concessionary period will apply not only to households and state funded organisations, but also to small commercial gas consumers. These proposals are now being implemented via resolutions of the government of the Russian Federation on reforms in the domestic gas market.
In 2008 qualitative research was undertaken to assess the macroeconomic impact of the economic and technological measures to curb greenhouse gas emissions (GHG) in Russia. Results of the calculations showed that in the period up to 2029 volumes of GHG emissions from fuel utilisation in Russia would most likely stay below the 1990 level even without any environmental measures (moderate scenario). Curbing GHG emissions within the range of 1-2% of the moderate scenario levels would have little to no impact on the rates of economic development of the country. It would, however, make it possible to maintain GHG emissions from fuel utilisation below the 1990 levels beyond 2030. As far as total GHG emissions from all sources are concerned, only curbing emissions at over 10% of the moderate scenario levels would allow to keep emissions below the 1990 levels in the period to 2030.