Scientific and practical projects in relation to forming projected fuel and energy balances, forecasting energy consumption and research on energy efficiency of the economy have been part of ERI RAS’s work since its foundation, and have always been a priority.
Initially work on the fuel and energy balances relied on the methodical results of A.A. Makarov and A.G. Vidorchik; the methodology was based on the “standard method” of calculating energy consumption (per unit consumption of energy resources times full size production of main product types) and consolidation of energy balances of specific fuel types into an aggregate balance of so called boiler and furnace fuel [1]. With the arrival at the Institute of the leading specialists from the State Planning Committee of the USSR (P.K. Aksyutin) and its computation centre facilities (led by T.V. Kleinik), ERI RAS specialists were able to develop a methodology for forming an aggregate balance of primary energy resources and some relevant simulation models, which translated domestic data into a single fuel and energy balance template, produced by the United Nations Economic Commission for Europe (with ERI RAS’s participation).
In recent years this area has been developed by the Corresponding Member of the Russian Academy of Sciences S.P. Filippov, Doctor of Technical Sciences A.N. Kurashev and E.V. Mokhin. It was in demand for solving various practical tasks. The most important of those were the preparation of materials for the development of the Energy Strategy of Russia for the period up to 2030, forming fuel and energy balances of the subjects of the Russian Federation in agreement with the national fuel and energy balance, analysis of energy efficiency of the Russian economy and its individual sectors. In the latter case it was essential to form a fuel and energy balance in the international format, based on Russian statistical data. As the structure of the tasks expanded, it became necessary to develop modelling and information tools of a new generation.
Formation of projected fuel and energy balances integrates the efforts and modelling and information resources of nearly all of the scientific departments of the Institute (Picture 1). The instruments used for these purposes include the following:
1) Optimisation models for forecasting economic development at the national and regional levels;
2) Simulation models for forecasting fuel and energy demand;
3) Industry optimisation and simulation models (the oil and gas sector, the coal industry, the electric power sector) for forecasting supply of fuel and energy resources;
4) Inter-industry optimisation model to determine optimum balances of commercial energy resources,
5) Simulation model for forming an integrated (mutually co-ordinated) system of projected fuel and energy national and regional balances, with a breakdown by federal districts and subjects of the Russian Federation. 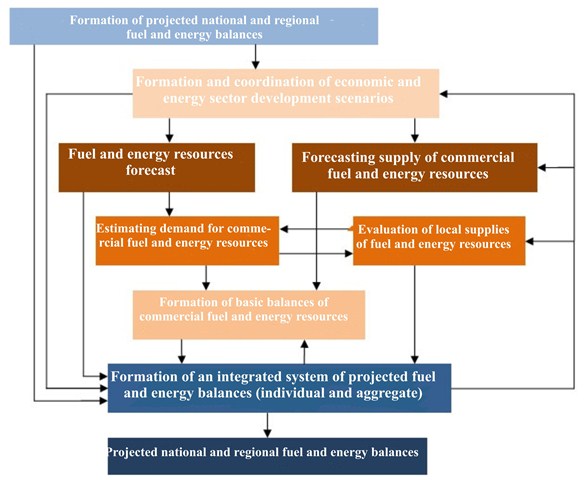 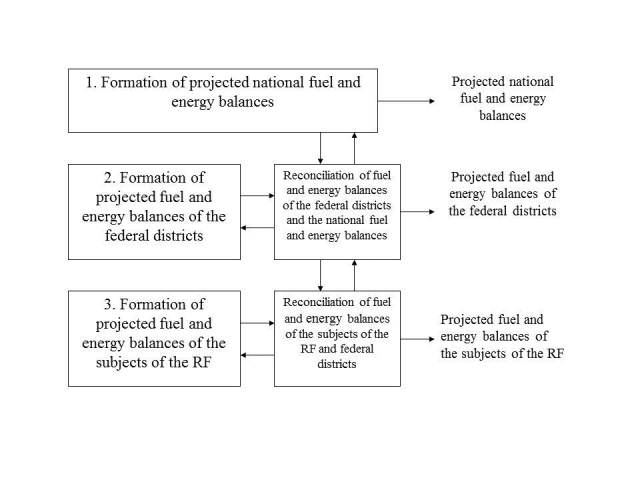 • Development prospects of large enterprises operating in the region;
• Investment projects proposed for implementation in the region; these include not only the large ones but also medium and small projects in combination with each other (in particular, using information on applications for being connected to power, heat and gas networks);;
• Development prospects of municipal entities and relevant energy consumption forecasts.

The first task is resolved by establishing quantitative links between energy intensity of the types of economic activity with external macro-economic parameters. The second task is resolved based on the methods of technical and economic analysis of competing energy saving and energy replacement technologies and measures in the end-use energy consumption sector. The impact of large investment projects on energy consumption is assessed using a relevant expert analysis.

In general cases the following algorithm for forecasting energy intensity is used (Picture 3):

1 – determining basic trends of energy intensity for each type of economic activity based on its links with macro-economic indicators;
2 – correcting the basic trend by implementing energy saving programmes and energy replacement;
3 – taking into account disturbances caused by the implementation of large investment projects. 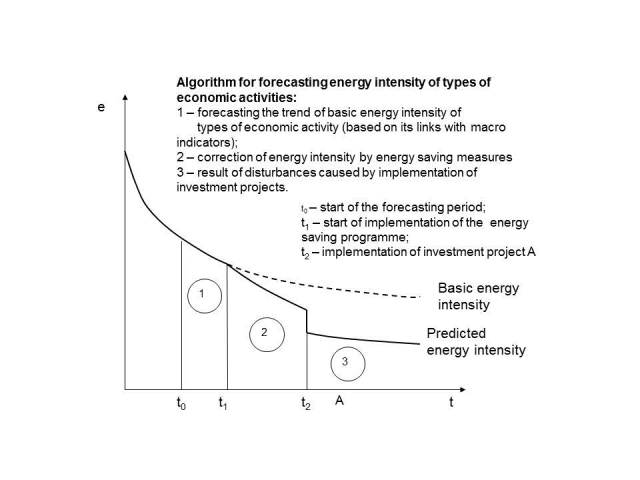